Kefir grains are a combination of lactic acid bacteria and yeasts in a matrix of proteins, lipids, and sugars, and this symbiotic matrix, or (SCOBY) forms “grains” that resemble cauliflower. For this reason, a complex and highly variable community of lactic acid bacteria and yeasts can be found in these grains although some predominant; Lactobacillus species are always present.

Kefir grains contain a water-soluble polysaccharide known as kefiran, which imparts a rope-like texture and feeling in the mouth. The grains range in color from white to yellow, and may grow to the size of walnuts.

The composition of kefir depends greatly on the type of milk that was fermented, including the concentration of vitamin B12.

During the fermentation, changes in composition of nutrients and other ingredients occur. Lactose, the sugar present in milk, is broken down mostly to Lactic acid (25%) by the lactic acid bacteria. Propionibacteria further break down some of the lactic into propionic acid (these bacteria also carry out the same fermentation in Swiss Cheese). Other substances that contribute to the flavor of kefir are pyruvic acid, acetic acid, diacetyl and acetoin (both of which contribute a “buttery” flavor), citric acid, acetaldehyde and amino acids resulting from protein breakdown.

The slow-acting yeasts, late in the fermentation process, break lactose down into ethanol and carbon dioxide: depending on the process, ethanol concentration can be as high as 1-2% (achieved by small-scale dairies early in the 20th century), with the kefir having a bubbly appearance and carbonated taste: most modern processes, which use shorter fermentation times, result in much lower ethanol concentrations of 0.2-0.3%.

You may be interested in reading ...  Assist your immune system with water kefir grains

As a result of the fermentation, very little lactose remains in kefir. People with lactose intolerance are able to tolerate kefir, providing the number of live bacteria present in this beverage consumed is high enough (i.e., fermentation has proceeded for adequate time). It has also been shown that fermented milk products have a slower transit time than milk, which may further improve lactose digestion.

For the preparation of the present factory-produced kefir, the so-called kefir mild, kefir grains are no longer used, but a precise composed mixture of different bacteria and yeast, allowing the flavor to be kept constant.

Traditional kefir is fermented at ambient temperatures, generally overnight. Fermentation of the lactose yields a sour, carbonated, slightly alcoholic beverage, with a consistency and taste similar to thin yogurt.

Variations that thrive in various other liquids exist, and they vary markedly from kefir in both appearance and microbial composition. Water kefir (or tibicos) is grown in water with sugar (sometimes with added dry fruit such as figs, and lemon juice) for a day or more at room temperature.

Follow me
Uta Heidelauf
'Trust your gut...' | probiotics 4 life | fermenting 4 wellness | sharing with you my recipes, news, and handy tips on improving your health with milk & water kefir and kombucha.

Follow me
Latest posts by Uta Heidelauf (see all)

'Trust your gut...' | probiotics 4 life | fermenting 4 wellness | sharing with you my recipes, news, and handy tips on improving your health with milk & water kefir and kombucha. 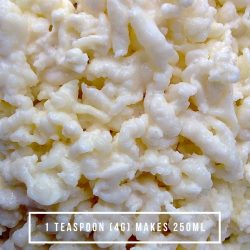 eNewsletter
How to Make Water Kefir